This page shows some of my songs and projects, both completed and ongoing.

The download links are currently broken due to a DNS issue which I am working to resolve.

All arrangement, production, engineering, mixing and mastering is credited to David Honour. The DAW used was Ardour, with Jamin for mastering run on Gentoo Linux.

Plastic Cups
Music and Lyrics by Honour/Batchelor Keyboards, Guitars, Vocals: Honour Bass: Batchelor/Honour Drums: Lawrence Judd Drum Recording Assistant: Michael Kemp
Download
Rough Mix (flac)
Writing
I wrote this song with my friend Ivan about living in student halls. We didn't necessarily have the same idea of fun as the people around us. They didn't have as many 9 o'clock starts.
Technical/Recording
One of the guitar parts and the bass were recorded in my room in halls. The drums were recorded in my parent's living room using a Yamaha AW16G hard disk recorder. The rest were recorded in my room at my parents. The pads were created with zynaddsubfx.
Gallery

The AW16G recorder and preamps. 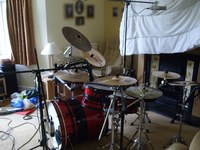 The drum kit ready to record. 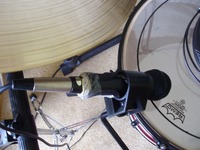 The floor tom mic (on the drum rack). 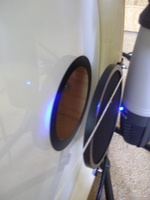